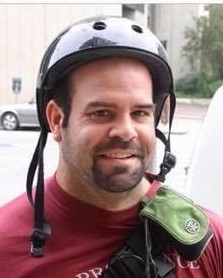 The Recycle-a-Bike family lost a great friend and fellow board member last week when Tom Gomes left us. As a founding member of Recycle-a-Bike, he was always generous with his time, using his prodigious wrenching skills to help others, be it at RAB, working at an MS Ride rest stop, or supporting the 1PVD high school cyclocross team. He was also an avid BMXer to the core, having been an organizer and participant in the Urban Assault bike jams.

If you were into bikes in RI, you probably crossed paths with Tom at some point. Many of his personal circles intersected with RAB and became part of our extended family. We at Recycle-a-Bike are better people for having known him. We’re grateful we got to play bikes with him for those far too few years that we did. We thank him for everything he did and on behalf of everyone he helped. He will be sorely missed.